Hey Hey vs The Pacific

The first contest between Hey Hey it's Saturday and Seven's miniseries the Pacific. 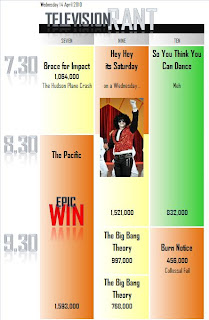 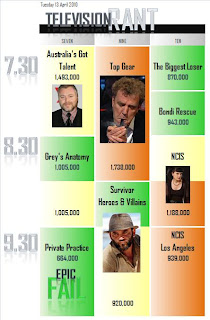 Fresh meat for Tuesday in the form of a new series of Australia's Got Talent - this time with Red Symonds and Tom Burlinson replaced with Kyle Sandilands and Bryan McFadden - and the result was actually quite impressive with almost 1.5 million tuning in - still that can't compete with the all conquering Top Gear which is the most impressive public to commercial transition since Kath & Kim went to Seven (how's that working out for seven anyway?)
Posted by H E Pennypacker at 7:06 AM No comments: Links to this post 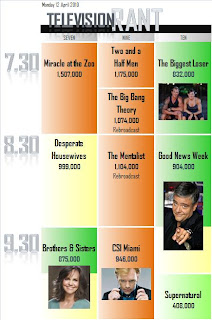 As much as Sunday night heralded the start of a tough new season, Monday seemed to pass by with networks asleep at the wheel! The Zoo get's 1.5million viewers!? The Zoo - now I didn't watch it but with a title like "Miracle at the Zoo" I'm betting they're talking about the Elephant recently born at Sydney's Taronga Zoo which vets beleived would be stillborn. Certainly there'd be some interest in that - but 1.5 million people! Wow, why bother spending money on a script or actors at all when you just poke around a zoo with a camera!

Meanwhile in other depressing trends the top show at 8.30 was a rerun of The Mentalist! A Rerun! Kudos to Nine for hitting on their own flavour of crack (not unlike the kind peddled by NCIS over at Ten) where people will suck up reruns on multiple nights and love every minute of it. I've not watched enough of this show to ascertain but perhaps in addition to a Mentalist Simon Baker is also some kind of hypnotist.

Granted if an ep of Star Trek the Next Generation comes on, I'd watch it even if I've seen it a hundred times, but that's a personal thing on a cult show - is the Mentalist like that for some people? Is it that good? While Star Trek may not get the kind of ratings I think it deserves, at least there's still an audience out there for science fiction as evidenced by the timeslot win for CSI Miami 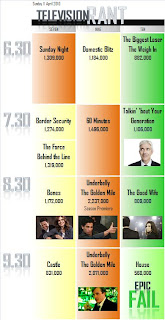 I don't know why it's taken channel Nine a full two years to realise that big audiences don't hit the box until after Easter, with Daylight Savings over and the weather getting colder, people have more time to spend in front of the TV.

This post Easter spike in viewers has been the case for years, but still TV networks have insisted on trotting out the big shows in February for the fear of others gaining a first mover advantage.

This year was no different, for some shows - but for some locally made big guns there's been an uncharacteristic and welcome restraint. Nine has held back the launch of Underbelly for after Easter with maximum impact - a 2.2 million strong audience shows none of the erosion suffered by other shows since last year.

Furthermore 2 months head start did nothing for the Good Wife, which (as the new kid in town) has the most fickle audience in Underbelly's (considerable) wake. Less fickle are the viewers of Bones who gave the show a healthy (and respectable) number against Nine's behometh.

Nine has also saved Sea Patrol and the revived Hey Hey it's Saturday for the post easter season, while Seven has a new series of Australia's Got Talent, it's big Miniseries "The Pacific" and is still holding back new seasons of City Homicide and Packed to the Rafters.

Ten hasn't changed a damn thing about their strategy and so far they are suffering because of it. Still everyone expects the sophomore season of Masterchef to do the business but from where I stand with their early evening in tatters, and post 9.30 slots filled with underperforming US shows - Masterchef is looking a lot like Big Brother did back in the day - an insanely popular yet solitary asset that Ten pours all their resources into at the expense of a well rounded schedule.

Incidentally EPIC FAIL of the night goes to House, Ten might wanna think about scheduling reruns in this slot for the next 11 weeks until Underbelly goes away, cuz at 568,000 viewers - they ain't competing.
Posted by H E Pennypacker at 3:00 AM No comments: Links to this post

H E Pennypacker
I Buy and Sell Men Like myself every day!

All copyright content on this blog including downloads and photos remain the property of their rightful owners.
All text and opinion © Copyright H E Pennypacker 2008, 2009.

Find what you're looking for...

After the Rant then check out...

Let me tell you where to go...