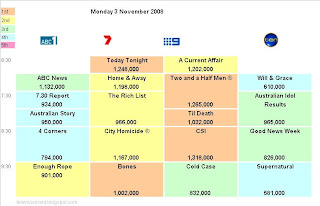 Wow, what a difference Australian Customs makes! These guys pack up and a whopping 600,000 viewers leave with them. Seven's replacement The Rich List (a last ditch attempt to save a one season wonder from the scrapheap) saw more than 700,000 viewers lost week on week.

The loss at 7.30 didn't help their 8.30 tentpole City Homicide (albeit a rerun) which recorded a timeslot loss against a first run fast tracked CSI.

By removing their factuals - Seven has essentially lowered the bar, allowing Nine to walk right over them.

Two and a Half Men pulled in it's usual good audience but the suprise was a timeslot win for Til Death finally over 1 million viewers, Nine can chalk up a win for sticking with this sitcom, unfortunately Til Death just got taken out of Fox's schedule for November sweeps - a move like that is NEVER a good sign - cancellation almost certainly follows so the Brad Garret sitcom is suddenly on the boil on it's home turf.

One of the weirder things to happen was the 9.30 timeslot. While Cold Case only retained 63% of it's CSI lead in, Bones retained a whopping 85% coming first in the slot with Andrew Denton's Enough Rope a close second.

While Nine jumped over the bar this week, Ten continued to limbo right on under it with nothing acheiving. Australian Idol had their best result on the night, but still copped a third place in the slot. Good News Week is struggling to get noticed at 8.30 - it doesn't help that runs against 4 Corners in what is a resurgent year for the ABC Public Affairs program, last night profiling the American state of Ohio in the lead up to tomorrow's presidential election.

A bright spot for Ten though was Will & Grace improving week on week by 12%, is it just a fluke or will Ten's health in the slot start to improve. Keep watching this space...
Posted by H E Pennypacker at 3:33 PM

A 12% increase for Will & Grace sounds great, then you look at the figure it takes them to and it seems just as bad as ever.

Ten need to realise they won't get far if they keep going with the strategy of showing reruns of old comedies isn't going to work at 7pm.

MASH sort of works on Seven for a few reasons, being on at 5 before a show people (for some reason) want to watch and that nice theme music.

With W&G it isn't the case, Ten is failing on every night in the 7:30 slot, so people aren't going to watch it to see the show afterwards (I think DOND rates well because people want to watch Seven News, not the other way round) and the theme tune isn't all that good.

Taken Out was a good step from Ten, they actually tried local new content that is different from what else is on. Now there were a lot of problems with the show itself, but at least they were trying. There is no evidence of that right now.

Ten need to take a risk and make another local show (I want Jeopardy) or a US show that hasn't been shown already. The Office is a good suggestion, but there is a pile of other suitable shows just sitting there.

If they really want to try something different, get a very controversial radio guy and give them a political/current affairs show. I'm not old enough to remember it, but Hinch sounded good.

I am old enough to remember Hinch on TV and he was good - got good ratings for them too - but ultimately they gave him the boot and tried Alan Jones instead - his show fizzed out and they haven't gone back to current affairs since which is a pity because they could offer something different to Nine and Seven.

I would also love for them to bring back Jeopardy - would be a good 7pm show after The Biggest Loser wraps in 09, when they first tried it in 93 it was at 6pm and (of course) bombed, but not much is gonna work in that 6pm timeslot thanks to news on the other two.

I was simply suprised that W&G went up - didn't think that would happen - we'll see tonight if that goes anywhere though.

I think Taken Out's main problems were, you couldn't explain it in a promo (if you wanna grab huge numbers of people to a new show it helps if you can explain the concept in under 30 seconds), also the set was dark and didn't catch the eye at all so if you were channel surfing you'd just as soon surf right on past.

H E Pennypacker
I Buy and Sell Men Like myself every day!

All copyright content on this blog including downloads and photos remain the property of their rightful owners.
All text and opinion © Copyright H E Pennypacker 2008, 2009.

Find what you're looking for...

After the Rant then check out...

Let me tell you where to go...